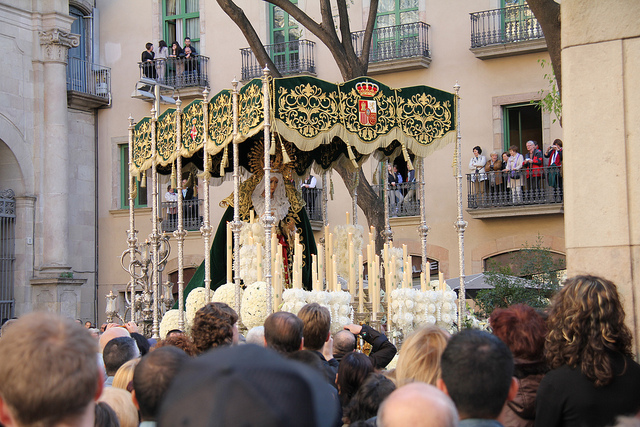 Spring is officially here, and so are all the events of April. The Holy Week, in Spanish "Semana Santa", is celebrated from 9th until 17th of April. In Barcelona you can take part in masses in churches, see different Easter processions on the streets, and of course enjoy the traditional food and delicacies.

FC Barcelona plays against Juventus on Wednesday 19th of April. If you would like to see the match on Camp Nou Stadium, you can buy tickets for the game here.

In April FC Barcelona plays three La Liga football matches. The first game is on Wednesday 5th against Sevilla, the second on Saturday 15th against Real Sociedad and the third game is on Sunday 26th against Osasuna.

All the three matches are played on Camp Nou Stadium, and by clicking the name of the teams you can buy tickets to the matches. During the weekend 29th and 30th of April is held Fira per la Terra, also called Mercat de la Terra. This event is organized yearly as part of the International Earth Day 22nd April. The first Earth Day was celebrated in 1970 aiming to create the modern environmental movement, and now it works in 192 countries around the world.

Fira per la Terra earth fair is held in Parc de la Ciutadella and on the street Passeig Lluís Companys which is next to the park. From here you can find ecological, recycled, and environmental friendly products. The fair also offers fun activities and workshops for children and families.

Planning to travel to Barcelona in April, and all but an apartment is already reserved? Habitat Apartments offers a wide variety of fully equipped apartments all around the city of Barcelona. Have a look for example on this spacious apartment, where sleeps comfortable six persons. The apartment is located in the tranquil Sarrià-Sant Gervasi neighborhood.