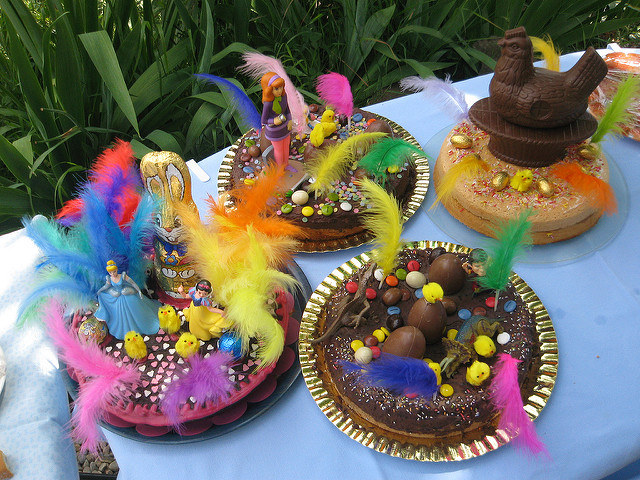 During the Easter period from 9th to 17th of April Barcelona has its own traditions and events. This is the main tradition of Easter in Catalonia, and these days the Monas can be found all over Spain. However, the tradition is celebrated same way everywhere. The godparent gifts the Mona de Pascua to her or his godchildren on Easter Sunday. In Catalonia the Mona is usually gifted on Easter Monday.

The traditional version of La Mona de Pascua is a round cake, similar to a big doughnut, with hard boiled eggs on it. Originally the number of eggs on the cake was symbolizing the age of the godchild.

Today the Catalan versions are artistically created chocolate pieces of art. You can see them in every bakery and cake shop window. The Catalans even have competitions about who makes the most fascinating Mona de Pascua.

You can try this recipe, if you want to try to do your own Mona de Pascua.

Because during the lent it’s prohibited to eat meat or eggs, the traditional Catalan Easter dishes are made of fish. Especially on Good Friday the restaurants will serve fantastic fish dishes. Cod cooked in different forms is the most common and traditional fish. Try it with chickpeas, potatoes or as salted.

“Esqueixada de Bacallà” is a typical Catalonian dish made with raw cod. The cod pieces are companied with some tomato, onion, peppers, olives, salt, vinegar and a dressing.

“Bunyols de Quaresmas” are a Catalan equivalent to Spanish Torrijas. The Bunyols are kind of doughnuts with a little bit of anis flavor. You can buy them from almost every bakery in Barcelona. On Palm Sunday there will be palm blessing ceremonies in Barcelona Cathedral La Seu, starting at 11am, and in La Sagrada Familia church starting at 12am.

On Good Friday Barcelona Cathedral in Barrió Gótico neighborhood organizes a ceremony at 3pm. A Canon reads and discusses the last seven words Jesus said before his death.

Easter Sunday brings Easter masses to all churches of Barcelona. The most popular masses are held at the La Sagrada Familia, the Barcelona Cathedral and Santa Maria del Mar churches.

“El Paso de la Borriquita” is the first Easter procession, and it’s taking place on Palm Sunday 9th April in Barrió Gótico neighborhood. The procession is commemorating the arrival of Jesus, riding on a donkey to Jerusalem. On the streets around the parade you’ll find stalls selling traditional bleached palm stalks and palm leaves.

On Good Friday 14th April there will be two big processions. The first one starts from Placa Sant Agusti in El Raval neighborhood at 5pm. There will be around 300 musicians and other participants taking part into the procession. The parade is led by La Hermandad de la Macarena, Paso Cristo. The Easter week begins on Sunday 9th of April, also called as Palm Sunday. In Spanish is called “Domingo de Ramos”. On Palm Sunday the shops are closed as usually on Sundays. However, the Maremagnum shopping mall is open every day, including Sundays and holidays.

There will also be special Palm Sunday markets in Barcelona. Check out areas around La Sagrada Familia and Barcelona La Seu Cathedral, and in Sants neighborhood the square Placa Bonet i Muixi.

Friday 14th April is Good Friday, in Spanish called “Viernes Santo”, and it’s a public holiday so most of the shops except Maremagnum shopping mall will be closed.

On Good Friday there will be two different Easter Parades – one in El Raval neighborhood and the other in Barrió Gótico area.

April 16th is Easter Sunday, “Domingo de Resurrección” in Spanish, and it’s a public holiday so most of the shops except Maremagnum shopping center will be closed. There will be masses and services in all Barcelona’s churches.

Semana Santa ends on Monday 17th April. Easter Monday is called “Lunes de Pascua” in Spanish. This is a public holiday, and most of the shops will be closed.

In Spanish it’s also called as El Día de la Mona de Pascua and this is the day when children gets their Easter eggs and the Monas.

Would you like to read more about Easter in Barcelona? Check out our earlier blog posts about Easter Traditions, Processions and Masses, and the Opening Hours.

Planning to travel to Barcelona for Easter, and all but an apartment is already reserved? Habitat Apartments offers a wide variety of fully equipped apartments all around the city of Barcelona. Have a look for example on this comfortable apartment, where sleeps comfortable five persons. The apartment is located in the exclusive Eixample neighborhood.