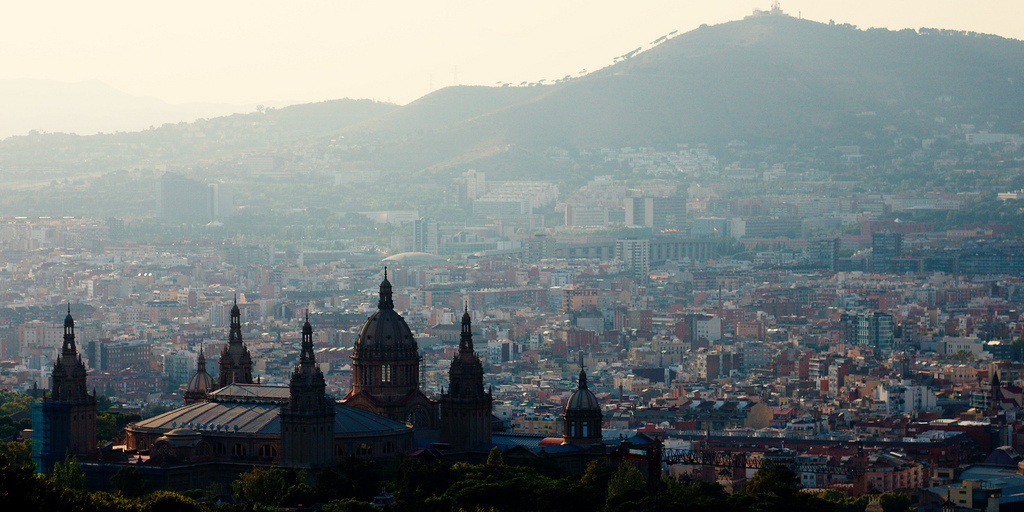 Montjüic is a hill located south-west from the Barcelona city-centre. From the top is a magnificent 360o view over Barcelona. In the area of Montjüic Park there are many places worth visiting, such as the Castle of Montjüic, the Olympic Stadium, and of course the Magic Fountain, situated below the Palau Nacional museum.

How to get there

Montjüic hill is easy to reach with the funicular from Paral·lel metro (green line), with the cable car (Teleféric de Montjüic) or with the bus line 55 directly from Plaza Catalunya. Castle of Montjüic was built in 1640 for protecting Barcelona in the Reaper’s War. It was used as fortress until the Spanish Civil War. After the war the castle was converted into a prison. Since 2007 the castle has been owned by city of Barcelona, and it’s a home to temporary exhibitions.

The Castle of Montjüic is situated 173 meters above the port, on the top of the Montjüic hill. From the castle you’ll have wonderful views over Barcelona.

From November to March: open from 10am to 6pm

From April to October: open from 10am to 8pm

The ticket is 5 euros. Estadí Olímpic Lluís Companys is the Olympic Stadium of Barcelona. The stadium was built in 1927 for the International Exposition (1929), and also for the Summer Olympics of Barcelona in 1936.

In the beginning the stadium was called only Estadí Olímpic, but later it got the name of Lluís Companys who was the president of Catalonia during the Spanish Civil War.

The stadium opened 20th May 1929 with a football match, where the Catalan team beat the English team Bolton Wanderers with 4 scores against 0. Since that the Olympic Stadium has been open for different kinds of events. Torre Calatrava, officially known as Montjüic Communications Tower, was built in 1992 before the Summer Olympics were held. The tower was designed by the Valencian architect Santiago Calatrava.

The 136 meters high tower has become one of the architectural landmarks of Barcelona, and it can be seen from many points around the city.

Calatrava designed the tower so that it would also work as a sundial. The central needle projects onto Plaça d’Europa. Palau Nacional was originally the Spanish Pavilion and constructed for the International Exposition in 1929. In 1934 it opened again as Museu Nacional d’Art de Catalunya and has been working as national museum ever since that.

The museum of Palau Nacional is the largest and most important museum in Barcelona. It exhibits more than 260.000 pieces of art.

You can see the opening hours for Palau Nacional here.

From here you can see our apartments at Montjüic area. For example this apartment accommodates comfortable four persons and it's located just a few steps away from the Montjüic park. 1 Reply to “Montjüic hill in Barcelona”